There’s a moment late in Dylan Tomine’s story “The Grand Salami” where he refuses to acquiesce to a flats guide’s insistence that he cast to a school of bonefish. Instead, Tomine decides to do his own thing—because clearly it’s the right thing. And this moment, arriving as it does late in his new book Headwaters: The Adventures, Obsession, and Evolution of a Fly Fisher (Patagonia Books), captures the essence of the stories he tells and the way he chooses to tell them.

Collecting Tomine’s writing over the past two decades, Headwaters peers into the soul of one of Washington State’s finest steelheaders as he fly fishes from southern Argentina to the Russian north. But his travels always take him back to his beloved Skykomish River near Seattle, and to its great run of winter steelhead that now seems all but lost.

In his Introduction, Tomine tells us that the stories in Headwaters are “arranged more or less in chronological order,” and as you move through the collection you can witness the early promise fully realized in his later works. Collecting older works does of course give writers an opportunity to re-envision them through fresh eyes, another chance perhaps to get them right. But there’s a danger in that: what an artist thinks and believes twenty years later might be very different than when a work was originally completed. And sometimes the updated version fails (see Coppola’s Apocalypse Now Redux and Apocalypse Now: Final Cut if you doubt me).

Thankfully, Tomine hasn’t tinkered too much. There’s a raw honesty in his early work that hasn’t been polished away by the hands of an older and wiser craftsman. These early pieces clearly show a writer doing his own thing, telling the truth about actions that might make lesser artists squirm. In the collection’s first story, “Confessions of a Steelhead Bum,” Tomine allows us an unveiled look into his heart, and he’s refreshingly candid about some of the dark little crannies we find there. I found myself admiring his courage when he shares the story of his response to an alarming event at home while he’s on the Bulkley chasing steelhead. Later in the same essay, a chance find along an early morning trail will have you asking what you would do in the same situation.

As we move through Headwaters, we can see the author’s skills evolving, though at times we detect that maybe his earlier voice has been somewhat muted. This isn’t necessarily a bad thing, as all writers eventually learn to axe anything self-indulgent that isn’t in service of the story. Sometimes, however, the internal editor that develops as we gain the insights of age can hush us too much, and our work loses some of its initial vitality. But as I read through his later work, I was pleased to see my worries were just that. The later writer still trusts his instincts, keeps reaching for his authentic voice, and that wonderful raw honesty comes through again, and even takes over from time-to-time, as it does in “A Small Offering” and the aforementioned “The Grand Salami”.

Tomine isn’t really a where to/how to guy, although most outdoor writers—even the good ones— get shoehorned into this if they want to get published. There just aren’t enough Gray’s Sporting Journals out there for all of us to write thoughtful essays that just happen to have fishing in them. If you want to get published (and name me a writer who doesn’t), you’re gonna have to squeeze into some tight-fitting wading boots from time-to-time. A good editor will let you dip those boots into a bucket of water so they’re not as tight, but you’ll still have to tug them on.

Fortunately for Tomine (and us), most of the work collected in Headwaters has previously appeared in the few print mags that focus on the why of fishing. He’s been handed a great gift, the grand opportunity to showcase his talents without the burden of being salable in the where to/how to press. That’s not to say that you won’t learn anything from Headwaters. Skilled wordsmiths will always find a way to weave in some technical tidbits for the interested readers. In “The State of Steelhead” he writes:

Four feet deep. Rocks the size of bowling balls. Choppy on top. The big purple marabou settles into the emerald-green water, comes tight, and starts swinging through the seam. I hold my breath and make a small inside mend. The fly slows briefly, swims crosscurrent into the soft water, and suddenly stops.

This is an easy passage to float through, especially since Tomine provides the big distraction by hooking a steelhead at the end of it. But if we look closely, he’s giving us a masterclass on how to swing flies for steelhead. Here you learn what kind of water to look for, what kind of fly to use, and how to slow down the drift. It’s all there, in just 52 words. Expert anglers who have a way with words can do this without any of us really even noticing it’s happening. It’s just like hooking a steelhead. Suddenly, it’s just…there. Brilliant.

Tomine weaves sentences together with enough detail to fill the mind’s eye without the self-conscious density that often slows the narrative of lesser wordsmiths. In “Operation Ditch Pickle” he writes,

She steps quickly in front of us and stops. Standing there in the sweltering heat, sweat-soaked swimsuit straps cutting deeply into tattooed and sunburnt shoulder flesh, a red-faced baby in one arm and the leash to a snarling Rottweiller in the other. “You the feather guys?” she asks. “Y’all got something to weigh?”

But, as any steelheader can tell you, nothing’s ever perfect unless it’s made by Hardy. Despite his command of his subject, and the written word, Tomine does slip up, perhaps intentionally, from time-to-time, as he does here when describing the wild flight of a newly hooked steelhead:

The fish greyhounds away, punching new holes in the river while the previous holes are still open.

Now I make no claim to hooking as many steelhead as Tomine has, but I’ve hooked a few, and I honestly haven’t seen this. A couple holes in the river for sure. But many, as the suggestion seems here? Hmmmm. Clearly, I’m nit-picking, and Tomine has earned his artistic license. Steelhead writers are prone to hyperbole after all, so Tomine is in good company if he occasionally indulges. But it’s worth pointing out for those who haven’t caught a steelhead before, that it’s unlikely that a steelhead will do this, at least not in the wild.

Reading Headwaters is a lot like a steelhead trip. You are wise to participate fully and enjoy everything that comes your way, but sometimes something unexpected and special grabs, and rips away with you. These are the really shiny ones, and among them are “The Worst Guide in the World”; “Confessions of a Steelhead Bum”; “What About Bob” (his profile of cane Spey magician Bob Clay); and “Salmon Dreams,” which completes the collection. “The Grand Salami” isn’t about steelhead, but it’s a shiny one, too. Search out these stories when you first open the book, and don’t be afraid to jump around a little and read what hooks you.

But you don’t have to go too far upriver and into Headwaters to find something special. Tomine’s Introduction is worth the cost of the book. In his quest to do his own thing—the right thing—in his fly fishing book, Tomine shares a story of bait fishing with his children. In these first few small moments, dangling baited hooks off a dock with his teenagers, he shows us a world connected by family and fishing. We see, in the pure and unfiltered enthusiasm that surrounds children trying to catch bullheads with their father, the real reason we all fish: the pursuit of those raw, unrefined, sharp edged emotions that connect us all, and remind us what it means to live with eyes clearly focused on the wonder of what’s right in front of us. And the responsibility we all share to keep it safe. 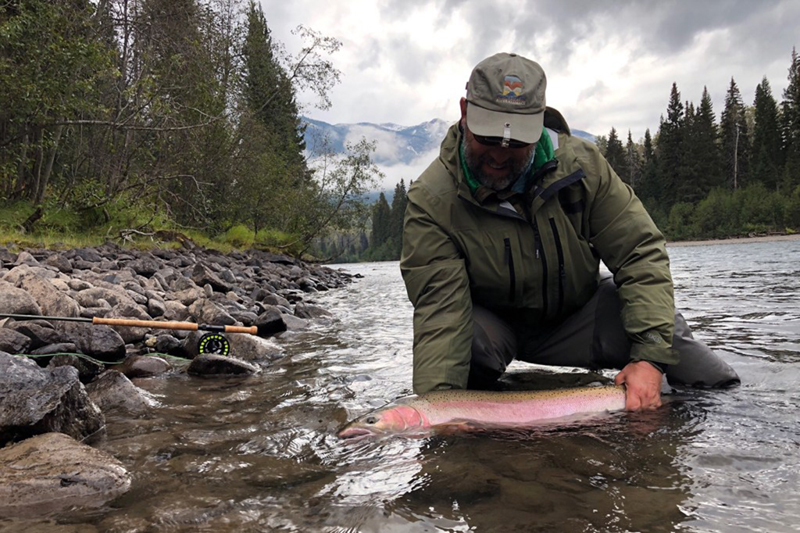