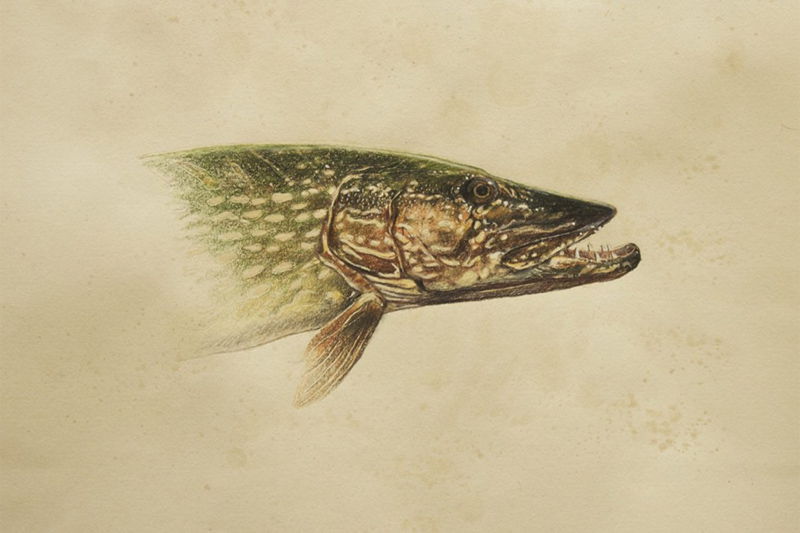 The northern pike is predation in its most distilled form. It is the perfect weapon—cannon and cannonball, wick and flame, all in a single package, ready to detonate on anything swimming by: a duckling, a bullfrog, a Murdich minnow stripped through the gloom of a boreal spring day. To understand the pike is to understand the wild ferocity that lives in all fish. In the pike, it just lives brighter.

I’ve been chasing pike a long time, in spirit and in flesh. The pike of my earliest years were figments, fragments and phantoms. They broke the stillness of mornings in the fish stories my uncle told, they ruled the bars of middle Wisconsin, where I’d stand on cracked vinyl barstools to count the teeth on head mounts. Instead of doing schoolwork I read Indigenous stories about the “Devil Fish” of the Yukon that swallowed canoes whole; about the ancient peoples of Lake Ancylus—now the Baltic Sea—who built fires on the bows of their boats and poled in the dark, looking to spear a giant; about the Victorian era British gamblers who tied a live frog to a duck’s foot, and when a pike ate, placed bets on either the duck’s or the pike’s survival.

The smart money was always on the pike.

My in-the-flesh pike education began when I was six years old. I had raced down to the dock to make the first cast of the day, my younger brother waddling far behind with a tackle box, my father still drinking coffee in the kitchen. There below me in the clear water I saw a great, hulking fish resting in the shadows of a johnboat, mouthing a perch like a cigar.

The perch was still alive.

I ran off the pier and threw my rod in the bushes. When my father arrived I made no mention of the beast, fearing he might tell me to cast to it. I spent that day casting my bobber right onto the beach.

It took another year or two before I was brave enough to catch a pike. And then I became obsessed. My brother and I lived to drag silver spoons tipped with pork rinds through the weeds, waiting for eruptions in the lily pads. We’d churn spinnerbaits through coontail, pining to get slashed. The pike’s ambush never disappointed. They sailed over the johnboat chasing our poppers out of the water. They t-boned our bass as we fought them. They were, by several orders of magnitude, the wildest things around. The first truly great fish I caught in my life was a Minnesota pike, a Boundary Waters fish to be specific. Our group had been tipped off about the presence of a large Esox in a particular bay by a party of retreating canoers. My brother and I decided to ignore the walleye and smallmouth in hopes of something bigger. Not having anything sufficiently large in my tackle box, I caught a bluegill, hooked it behind the dorsal with the biggest hook I had, then trolled it on a long line over a deep cabbage bed.

The pike that came up to eat it was so large I fought it to the canoe three times before it broke my line. It was so heavy that the canoe, over-freighted by two anglers and two full Duluth packs, would start to take on water before we cleared the fish’s creamy white belly from the lake. We’d lift and tip, lift and tip. It was a perfect equilibrium, just like the enterprise of pike fishing itself, a balancing act where hunter hunts hunter.

As we grew older our passion for pike took my brother and I farther north. Slowly, we learned the haunts of the biggest fish on any given watershed. In far northern Ontario, we camped on islands shared by calving caribou and spent our days canoeing over the depths until we found lake trout and the huge pike that followed them. One day, on a white articulated fly with a tungsten head and sinking line, I hooked the second largest fish of my life, bested only by a lake sturgeon.

“This is why we came here!” I yelled over and over as the rod bent toward breaking and my brother aimed the canoe for a small island where he could get out and land the fish. But the pike saved its hardest run for last, and when he and I pulled at the same time, the line broke. The pike won.

The smart money is always on the pike.

Nowadays, I dream of lands even further abroad. There is a lot of unexplored pike water left in the world. The giant pike of Scandinavia, the beasts of Siberia, the goliaths of interior Alaska, the silver specimens of Mongolia. And the pike’s presence all across the Northern Hemisphere is no accident or sleight of hand. While some fish spread through the world via the doting hands of anglers who tucked their eggs into blankets of moss, the pike broadcast itself across the breadth of the Northern world without aid, driven only by its curiosity to kill and eat new things.

Chase pike long enough and you will in turn absorb the best traits of the predator. Cunning. Stealth. Courage. Surprise. Show me the angler forged in pike fishing, and I’ll show you someone who can hunt. This year, no matter what you fish for, take time to fish for pike. When it comes to becoming a master predator, the angler will find no better mentor.